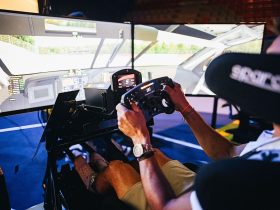 In the leadup to the new streaming series Cars on the Road, let’s revisit the surprisingly good Cars video game trilogy.

Typically when it comes to video games that are tie-ins for movies, they’re a hot mess. The likes of E.T., The Matrix and The Amazing Spider-Man 2 all had game adaptations that came out to coincide with the theatrical release. This has been a common practice over the years to capitalise on the hype of the movie, and make as much money as possible.

That, however, is also the reason they so often turn out terribly, due to the lack of time they have to develop the game. Which is why the best games from franchises that are typically seen on the silver screen tend to be standalone titles that were released outside of any marketing campaign for a movie.

Some examples include the Spider-Man games by Insomniac and the Mad Max game which released a few months after Fury Road. But it isn’t impossible to make a good movie tie-in game, with Goldeneye often cited as the gold-standard. Another, though, is the 2006 video game of the Disney Pixar movie Cars. In fact there was not just one, but two additional games before the Cars movie sequel even released.

With the upcoming release of the streaming series Cars on the Road, let’s take a road trip down memory lane and look at the three games that spawned from the release of the first Cars movie.

It’s fair to say that a sizeable portion of OverTake readers may have grown up with the Cars franchise. If not, let’s bring the uninitiated up to speed. The movie follows young hotshot rookie racecar Lightning McQueen as he competes in his first season of the Piston Cup Racing Series against the likes of legend Strip ‘The King’ Weathers and perennial runner-up Chick Hicks.

Heading into the final round, all three are tied for the lead. McQueen ignores calls from his crew to take new tyres and, just as he’s about to win in very convincing fashion, his rear tyres burst and both Weathers and Hicks cross the line with McQueen in a dead heat. The organisers arrange for a tiebreaker race for the following week.

In McQueen’s eagerness and selfish ways, he pushes his transporter Mack to travel all night long and is separated from him as a result. He ends up in a rundown desert town called Radiator Springs, where he is made to fix a road he unintentionally destroyed. Meeting the locals, McQueen begins to learn the value of humility, community, putting others before himself and appreciating life at a slower pace.

During his time there, he befriends a hillbilly rusty tow truck named Mater and falls in love with former LA hot-shot attorney Sally Carrera. McQueen also meets Doc Hudson, the town judge and doctor who just so happens to be a former Piston Cup racer. Dubbed the Hudson Hornet, he was a 3-time champion whose career ended after a terrible wreck over 50 years prior, and has been hiding away from the racing world ever since.

The first in the series of games is Cars: The Video Game, which picks up the year after McQueen’s first season in the Piston Cup. McQueen was about to win the previous year until Chick Hicks punted The King into an airborne spin and McQueen stopped to push Weathers, so he didn’t suffer the same fate as Doc Hudson.

The game starts just as McQueen begins his training for the season. The player can drive McQueen around an open world Radiator Springs and other parts of Carburetor County in the vein of Need for Speed, Grand Theft Auto and Midnight Club.

They can interact with other characters or compete in street races and other game modes. Whether it’s driving on two wheels, jumping, drifting or backwards driving, the game offers it all. The aim of the game is to compete in Piston Cup races around the country to win the Piston Cup.

It’s also worth noting that the majority of the voice cast of the movie returned for the game. So there’s Owen Wilson as McQueen, Larry the Cable Guy as Mater and Paul Newman as Doc Hudson.

By the end of the game, McQueen has won his first Piston Cup and lines it up alongside all of Doc’s. Cars: The Video Game proved to be a success and it was soon followed by a sequel which released a year later, called Cars Mater-National Championship.

Just like the movie’s 2011 sequel, the follow-up to the first Cars video game had an international flavour to it. In the process of building McQueen’s new racing headquarters and a racing stadium, a tournament had been organised and cars from all around the world were invited to participate.

New characters include the likes of Koji from Japan, Giovanni from Italy and Emma from England. They’re all interesting enough, albeit rather boiled down to overly-competitive stereotypes. It is – however – to the detriment of characters like Sally, Mack and Chick Hicks who are all noticeably absent.

Mater-National still retains the open world element that made the first game so special, so players can still drive McQueen around Radiator Springs, Tailfin Pass and Ornament Valley. It also retains the driving mechanics, with drifting and jumps. The game does improve on the predecessor in a way, as it feels less vague in the corners.

When it comes to content, the Piston Cup races from the previous game do not carry over, as it’s now centred on challenging all the visitors. There isn’t as much variety as the previous game when it comes to the types of game modes and there aren’t as many cutscenes or as heavy an emphasis on the story. As a result, it does leave it feeling a bit empty in comparison to the first game.

Regardless, despite its shortcomings, it’s still very much a fun title and a worthy follow-up to the first instalment. Fast-forward another two years though, and another game is released; Cars Race-O-Rama.

The Best of Them All?

The game opens with Lightning McQueen having set up his own racing school called the Doc Hudson Racing Academy. He is driving with cars that are members of the academy when they are then rudely interrupted by the arrival of Chick Hicks. With his own academy, Chick aims to win the upcoming Race-O-Rama series and McQueen has to beat many of his students to win the championship.

Again, the open world element remains and is vastly expanded upon. While in the previous two games, players could only go to Radiator Springs, Tailfin Pass and Ornament Valley, Race-O-Rama now has them all as one big area. Then there are other places in the Cars world to go such as Santa Carburera, Autovia, Motoropolis, and even though it’s only for one gamemode and not featured as an open world setting, Tokyo.

There is now visual customisation beyond the paintjobs, with players now able to equip body mods like spoilers. Although none of it makes McQueen any faster.

In many ways, they made a lot of quality of life changes. In the previous games where the button to drift essentially just felt like a handbrake, now players press the button to initiate the drift and let go to then counter steer, or “turn right to go left” as was popularised in the original film. Speaking of drifting, the boost now gets recharged by drifting so it rewards players who can master it.

Along with a couple of new game modes like Guido Kart, it’s safe to say that Race-O-Rama is the best game out of the three in terms of gameplay and content. Although in terms of capturing the Cars world, the original does that best.

What About the Sequels?

When 2011’s Cars 2 and 2017’s Cars 3 were released, they too had coinciding new games. Cars 2: The Video Game and Cars 3: Driven to Win were certainly serviceable and did the job as decent movie tie-in games. But, in a clear attempt to make the games seem bigger, all game modes would take place in simulations.

With Cars 2 being a movie about spies and Cars 3 touching upon the modernised racing world with their simulators, the developers certainly leaned heavy on those themes to visit more outlandish locations. Ironically, though, it made the world feel smaller and more enclosed.

Gone was the open world element of the three aforementioned games. Now the series had become just like any old arcade racer, with no proper grasp of the Cars world.

If this has put you in the mood to play the original Cars game trilogy, the first two are available on Steam whilst Race-O-Rama never got a release on PC. The consensus is that the Xbox 360 versions of the games are the best, and to avoid the portable console ports like the ones for Nintendo DS and PlayStation Portable at all costs.

Are you tempted to play the three Cars games? Tell us on Twitter at @OverTake_gg or in the comments down below!