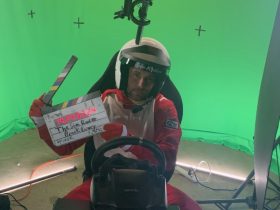 The Sim Racer: Bringing sim racing to the movies

In the leadup to the Spa 24 hours, Madpanda Motorsport owner and driver Ezequiel Pérez Companc agreed to an interview with us about balancing sim racing in a real world championship.

For the 2021 season, the SRO Motorsports Group decided to make sim racing an integral part of the GT World Challenge Europe Endurance Cup. With the Fanatec Esports GT Pro Series, teams from the Pro and Silver classes nominated one of their drivers to race on a sim and earn points for them.

The drivers would gather in the Fanatec Arena on the day before the main event and compete in a 60-minute long race on Assetto Corsa Competizione. The top few finishing drivers would score points that would then count towards their team’s championship tally.

We’ve spoken to a couple of the drivers from the series about having sim racing count for real world points. However, we were interested to learn about the mandatory addition of sim racing from the perspective of someone who owns and operates one of the smaller-scale teams.

Well there was only one person who fit the bill, and that would be Ezequiel Pérez Companc of Madpanda Motorsport.

The 28-year old Argentine driver has been racing in top-level GT3 championships since 2015. He has raced for leading teams using Aston Martin, Audi, Ferrari and Lamborghini machinery in the likes of GT World Challenge, ADAC GT Masters and International GT Open.

He started up Madpanda in January 2020 and they’re based in Spain. In that season’s GT World Challenge, Companc won the Silver Cup championship and in 2021 they won the Silver class at the 24 hours of Spa.

When it concerns the Fanatec Esports GT Pro Series, Madpanda were the top scoring Silver team. With Companc and teammate Juuso Puhakka collecting an extra eight points from the Fanatec Points Boost to add to Madpanda’s Silver team’s championship tally.

Those points earned them at least one extra place in the Endurance Cup final standings as they finished two points ahead of TokSport WRT. TokSport only scored two points from the Fanatec Esports GT Pro Series.

So when we got the chance to talk to Companc about balancing sim racing and track racing, we didn’t hesitate.

OverTake: What has been your personal relationship with sim racing?

I’ve been really into sim racing for a long time, always loved it. For me, it’s the best way to spend your time when you are not at the real racetrack, being behind the wheel. Whilst it’s nice to go karting in real life, sim racing brings something different, especially for me with the competition.

Finding other drivers online makes it really enjoyable, helps me keep focused. It’s amazing how well built the multiplayer of all these games are, like iRacing, rFactor 2 and ACC , there are a lot of really good simulators and you can really enjoy yourself and remain competitive.

I’ve been more involved in it from 2019 when I made my own simulator at home. I then spent the first part of the pandemic when I was trapped 24/7 at home, it was the perfect time to get more involved. Of course, that time was very tough but the sim was super nice to spend that time and improve my racecraft.

OverTake: What was your feeling about the idea of having virtual racing count for points in GT World Challenge?

At the start it was a bit weird because you never know when they propose this kind of idea just how they’re going to set it up. There’s a lot of organisation that goes into it and it’s never as simple as them just saying “here’s a sim, do a race” as there has to be a lot of preparation from the competitor’s side.

I think SRO did a very good job with it on a preparation side. For the first year, there was of course a lot of things for them to learn but it’s to be expected. For this year, they’ve listened to a lot of feedback that we had and implemented it.

It’s a great way to promote the idea of sim racing to people, since it’s so difficult these days to get into real life racing due to the budgets being crazy, even in karting. I think with sim racing, it’s nice to do since you can have your job, your daily life and a stable income but once you arrive home, you can jump in and race. So it’s nice to see that they start to merge together.

I see it as a positive, for sure there are still steps that need to be taken in terms of how we compete. For example, it would be nicer to have sim racers rather than real life drivers have the chance to compete in these races. We dedicate all our time to real life racing, so to do a sim event in the middle of a busy weekend, it is really tough since there’s a mix of drivers who have varying levels of involvement in sim racing outside.

Some drivers take it really seriously, some teams push a lot for their drivers to get better but then there are teams who could take it more seriously and support their drivers. The potential is massive, but in personal opinion I would much prefer having real sim racers do these races. Getting drivers linked with esports teams to attend the event, give them a chance to race in that setting.

Every time, sim racing is becoming more and more developed and it’s getting closer to real life racing, like you see with James Baldwin who does amazing in sim racing and now he’ll be doing the Spa 24 hours. For me, sim racing should be about giving the chance to compete for real, give them something to work towards, incentivise people to buy a wheel and dedicate time to it. Starting out as a hobby and then if you’re good enough, it results in real life teams providing you opportunities.

Maybe what they could do is mix it. Have half the race done by us pros and then hand it over halfway through to esports racers.

OverTake: As the owner of a smaller independent team, how does the inclusion of sim racing impact your preparations?

As a team, doing sim racing on the same weekends is tricky. For me it’s really difficult to balance, we always push with SRO to make the schedule work. We always need to put in a lot of preparation on both sides, so let’s say they put something together for us drivers to help us out would help, because I think they severely underestimate how much effort it takes to race on a sim.

Even though you’re not moving like in a real life car, it still takes a toll on your body, your mind plus you have less sensations to rely on. Since you’re driving in real life, you’re always focusing on that and getting used to it, to then switch for sim driving with little preparation, it was always one of the points we were discussing with SRO last year and they’ve been working on it, still could make more steps to have better race weekend structures. They do want more people watching onsite so they won’t have it late at night since most attendees are already back at their tent or hotel.

But from our side, we need our rest and our time to debrief, to prepare for the real life race. Although the nice thing about it is that they take the time to listen to our feedback and do their best to implement it.

OverTake: What do you see for the future of integrating sim racing into real world championships?

It’s a tricky question, because it’s all about how you do it. Adding sim racing in there would always have to be done in accordance with the teams, they need to have a say and a vote. Since many of the drivers don’t have a strong background in sim racing and they would have to race against drivers who are more involved in it.

Therefore if it influences points in a real world racing championship, it’s a big advantage to real life drivers who are experienced in sim racing. In my opinion, it’s not the point of sim racing, for me we need to have sim racers in those races. They’re the ones who dedicate their time to it so they should have the chance to prove their worth, be next to us and competing on our behalf. This is how you boost the sim racing scene, give any hopeful sim racer a chance to represent a racing team in an event of that scale.

It needs a lot of thought put into it from the organisers, the teams and the sim racing community. It makes no sense for the organisers to do it alone without input from the people who will be involved. It is a sensitive matter and it needs to be done the correct way.

OverTake: Are you tempted to create a fully fledged esports division of Madpanda or is that not something you believe would be beneficial in the foreseeable future?

As I said earlier, I really like sim racing and I know a lot of people invest a lot of time not just as a hobby but also as a profession, the community is growing a lot. On my side, I’m really tempted. Of course, being such a young team, there’s a lot we have to do before we can think about expanding into sim racing.

Also with the pandemic, some personal projects that we had needed to be delayed so we’re prioritising them at the moment. But in the long run, for me I’m more than willing to have a sim racing team. The goal is to motivate young talents who never had the possibilities to race in real life.

If we want to do things, we want to do it in the correct way, not just for the sake of doing it, we’ve been approached by many sim racing teams offering to merge with us. But in the end, it’s another structure to build and it’s never as simple as “Okay let’s do it”, we want to do it properly and not be too hasty, the project is there but we just need to take it step-by-step.

This weekend is the 24 hours of Spa, all the action can be followed on the SROMotorsport Twitch channel and GTWorld YouTube channel. Including the third round of the Fanatec Esports GT Pro Series, which will most likely feature James Baldwin looking to score five points for his team Garage 59.

Keep a lookout for that iconic panda-covered Mercedes during the event. It’s certainly one of the most iconic liveries that hopefully us esports racing fans will one day become accustomed to seeing as well when Companc does start up Madpanda Simsport.

Would you like to see Madpanda in esports racing? Tell us on Twitter at @OverTake_gg or in the comments down below!