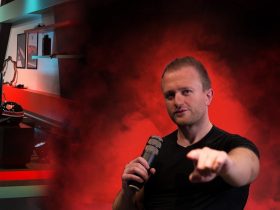 Since March 2022, Gran Turismo 7 has featured Porsche’s first-ever concept car solely created for a computer game: the ‘Porsche Vision Gran Turismo’.  At Gamescom, the German manufacturer presented a real-life mock-up of the car with a very special delivery designed by Belgian artist Vexx.

We met Deniz Keskin, Director of Brand Management at Porsche, to learn more about both the virtual and real-world edition of the futuristic sportscar.

OverTake: What was the biggest challenge in bringing this Vision GT to life?

Deniz Keskin: A lot of people within Porsche worked in this project and took it really seriously, almost like if you designed a real car.

OverTake: Why have you chosen Vexx to design this special livery? And what do you like most about his art?

Keskin: I look at the Vision GT almost like a beautiful canvas for everything we do with the gaming community. For us, it was really cool to add some street credibility and some street culture to the whole theme. And if you look at the market, Vexx is one of the artists who I think has a strong and incredible followship.

We also visually like his art, the way that he plays with colours. So, for us, that was a perfect match. Also, right from the start we thought about merch and giving people additional access to this project.

OverTake: How important is it for Porsche as a brand to present this Vision GT car at a massive event like gamescom?

Keskin: It’s extremely important. This is the biggest gaming fair in the world. I think this is our love letter to the gaming community. We have designed the Vision GT especially for the people in this community who love racing and who love Porsche. And this is a way for us to connect to these people and give back our passion for cars.

OverTake: Whats one thing everyone should try when racing the Porsche Vision GT in Gran Turismo 7?

Keskin: It’s a sub-virtual car. We built a physical mock-up, but the car is designed for the virtual world. And there is one thing you cannot replicate in the real world yet. That is the cockpit perspective. We have added something typical for Porsche, something driver-centric, which is a holographic display.

So, for everyone who plays this car in Gran Turismo, use the cockpit view and use this kind of really new holographic way of dealing with information while driving.

OverTake: If this car were to be built in real-life, which driver should get the inaugural drive?

Keskin: I had the great pleasure to meet Jimmy Broadbent. He was also part of the presentation of the initial concept. I’m sure he would want to give it a go in the real world.

But I would also like to see that our works drivers, for example the guys who drive Formula E, would think if there would be a real-life version of this car. I think they would have fun with the concept, the agility, the power, the electric nature.

OverTake: Will there be any esports competition with the Vision GT?

Keskin: Actually, there already has been one. Our colleagues in the US made an online tournament in Gran Turismo 7. And the winners will be able to compete at a very special event in Indianapolis, the Sportscar Together Fest.

We are already talking with other markets to host similar tournaments. There is going to be a lot of activity coming up.

OverTake: Can you tell us a secret, or story nobody knows about this Vision GT?

Keskin: There is one more version of the car that we have not revealed yet. That’s something to look forward to in the next couple of months.

OverTake: Thank you for your time, Deniz!

If this version of the Porsche Vision GT has caught your eye, take a look at our #PicOfTheMonth contest on Instagram. Anyone who enters before 31 August will get the chance to win a 1:18 model of the car, complete with Vexx’s livery!

What is your opinion on the Porsche Vision Gran Turismo? Tell us tweeting @OverTake_gg or leave a comment down below!