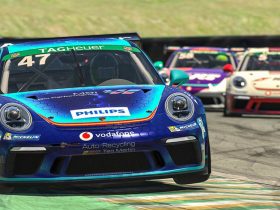 After six consecutive weeks of racing, we had a chat with Australian Supercars Pro Eseries competitor Jake Burton who came close to winning the championship.

Wednesday mornings for Europeans were made that much better between July and August, as the Supercars Eseries returned. The official esports series of the Australian Supercars Championship that sees some of Oceania’s top sim racers compete in the powerful, heavy touring cars from Holden and Ford.

Since 2021, the series has also seen some of the top drivers from real world Aussie Supers and other track drivers race together as well. The real world pros competed in the All-Star Eseries and the esports drivers were in the Pro Eseries, and they even teamed up for enduro races.

Our very own Emily Jones competed in the series, but also a mainstay in the series is Emily’s partner Jake Burton, who entered into the final round in contention for the championship. Burton races for Brad Jones Racing in the Eseries, having done so since the series began in 2019.

In that time, the Eseries was only won by drivers who competed with the Walkinshaw Andretti United outfit. Josh Rogers was the inaugural champion and Dayne Warren won the subsequent two seasons. Entering into the final round though, Burton and his BJR teammate Madison Down along with Erebus’ Jarrad Filsell were in contention for the championship.

Ultimately, it wasn’t to be Burton who became the first non-WAU Eseries champion. That honour went the way of his teammate, Down. Nevertheless, we reached out to Burton to talk about the significance of the Supercars Eseries.

OverTake: You were contending for the Pro Eseries title until the end, losing out to your teammate. Ultimately though, how do you feel the season went?

Really good, honestly. From a personal perspective, I didn’t make any major mistakes this year and there were rounds where I had really good speed, also won a race which was nice, haven’t done that since 2019. Really felt as if until the last two rounds, I had a bit of a flawless run and was just overall a solid season.

From a team perspective, this is the strongest we’ve ever been. For Madison to come away with the championship is brilliant, I’m really stoked for him but it was a team effort, we’ve both been the most competitive we’ve ever been for a couple of seasons. There’s a lot going on behind the scenes as well, the engineers that work with us to make it happen.

Was a great season, disappointed not to be the one to come away with the title. We always hoped that one of our cars at least won it, and to finish third isn’t a bad outcome.

OverTake: Since 2021, the Eseries has had an equal split focus on both the full time esports racers and the real-life Supercars drivers. How have you felt that has benefitted the series and how much have you enjoyed working with your enduro teammates from real-world supercars?

It adds a whole other element to it. I think it’s brilliant from the perspective of bringing in more fans, the ones who latch on to the personalities from the real world Supercars, and those fans will then watch our Eseries so it’s really big for us.

In terms of working with the guys, it’s awesome. We’re really privileged at BJR to have both last year and this year had the enduro teammates we did and they really took it seriously, I know there’s a lot of real life drivers out there who don’t take sim racing as seriously. They see it as a bit of a joke, we’ve seen that in the Eseries as well.

But we’re very lucky that the drivers we had stepped up and respected what we are good at, in the same way we respect how unbelievably talented they are in the real cars as well. It’s awesome to see these guys push to help us get a result, to show how much they care about it and the respect it shows us.

A lot of the All-Star drivers who ran up at the front this year, Brodie Kostecki is a really good example, he’s talented enough to be in the Pro Eseries. It’s really good to see that crossover.

OverTake: You’ve raced in all seasons of the Eseries. In those first two seasons, they had three races per event across two tracks, which meant it was a 16 race season. Now it’s six rounds with just the one race. Which season structure do you prefer?

It’s hard to say, to some extent I prefer how it is now, because I like how it’s just focused on one track. For someone like me with so many commitments outside of Eseries and other racing to deal with, infact so many of us at the front like Jarrad, Madison, Dayne, we all have jobs or serious commitments to deal with.

So to have to only prepare for the one track is really nice, especially now since it’s open setup again, having to do three tracks with three different setups would be almost impossible to be honest. I like it from that perspective, but it also felt like there was somewhat of a lottery to it as we used to have reverse grid races which benefitted those who made mistakes in the earlier races. It was less skill-based and more on fortune.

The only downside to it is that we don’t get as much racing. Back then, we’d get three 15 minute races, now we only have the one 25 minute race, so there are pros and cons to both. They do broadcast qualifying now, which they didn’t used to do. All things considered, I prefer the way it is now.

OverTake: In the Pro Eseries, there are a lot of drivers who do track racing including yourself. How has being involved in the championship provided you with real world opportunities?

All us BJR Eseries drivers probably have the best opportunity in real life imaginable. Part of our deal to race for Brad in the Eseries includes a test day each season in their real life supercar, not a Super3 or Super2 car, the full on ZB Commodore that they race in the actual series! It’s a real privilege.

There’s not many racing drivers who have had the opportunity to drive those cars so to get an opportunity to drive it not just once but every season as a result of our virtual competition, it’s just awesome. I’m starting to see it happen a lot more in the Eseries with the drivers, so it could lead to a pathway in the future.

OverTake: Outside the supercars fold, you’ve been getting involved in other major championships. You starred in the VCO Esports Racing League on iRacing as well as doing rFactor 2 with YAS HEAT. You also did the 24 hour Infinity event with them. How did that come about and what other esports racing series are you committed to?

I competed in ERL on account of joining YAS HEAT as part of Veloce. That was an opportunity that came about through Emily, she’s obviously a Veloce driver and has been for some time. They were looking for someone and Emily put my name forward, I was available on those days and the relationship started from there. Now I’m a full blown YAS HEAT driver, it’s cool to be part of such a big network of organisations.

I’ll continue to do some events with them, unfortunately I cannot commit fully due to my full time job and sim commitments within Australia, but there are a few things on the list that I would like to do.

At the moment I’m competing in the Logitech G Supercars Pro Invitational which is probably the main series I’m running outside of the Eseries. I would like to have a go at some European and international racing sometime soon, maybe like the Porsche TAG Heuer Esports Supercup but probably not at the moment.

OverTake: How is it to be sharing the track with Emily? To compete in the same championships and train together whilst being in the same household, what’s that dynamic like?

Well, we both respect our own competitive integrity. Obviously, being in rival organisations when it comes to our Australian commitments with Emily competing for Trans Tasman Racing and me with BJR. Though with our European commitments, both being in the Veloce fold means we can be a bit more relaxed.

We avoid looking over each other’s shoulder, we have our sims in separate rooms. Fortunately since we’ve been living together, thankfully there has been no on track incidents or shared the same bit of track really. It’s been important with us like with anyone, leave the on track stuff on track and once we finish up with that for the night, we forget about it.

We’re definitely really different people on the sim when we are racing to then when we’re hanging out. Learning to separate the two worlds is healthy for any set of people, it’s really important.

Did you watch the Supercars Eseries? Tell us on Twitter at @OverTake_gg or in the comments down below!