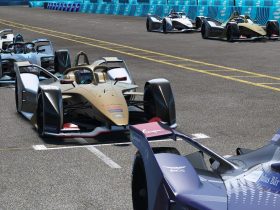 OverTake presents our Heroes of the Month for April: track and sim racing outfit eTeam BRIT.

There are many teams in the world of real and virtual racing but none quite have such a purpose as this one. eTeam BRIT is the esports division of Team BRIT, an outfit that is purely made up of drivers with disabilities. Whether they are physical or neurological, their aim is to provide opportunities for all their members to compete on a level playing field.

Now they are going a step further, they’re looking to enable a disabled sim racer to race in the real world. For all they do for countless aspiring drivers with disabilities, as well as for the way they provide them with the necessary controls and allow their drivers to prove themselves with no special exceptions, this team continues to inspire. This is why we are making eTeam BRIT our heroes of the month for April.

Getting off the ground

The team finds its origins within Kartforce, a team made up of injured soldiers that compete in 24 hour endurance karting races in specially adapted karts. This desire to compete then evolved into car racing. Subsequently in 2015, Team BRIT was born. They got to work acquiring a car and a team of people, and soon began making an impact.

What started as three drivers and two mechanics team in a Volkswagen Golf quickly turned into much more. They competed in the 24H Series event at Silverstone and then the Fun Cup 25 hours of Spa. To the team, it will never be enough to be there to make up the numbers. Nor will they accept being given an unfair advantage just to be level with their competitors.

When starting out in car racing, they were tasked with having to adapt the car in order to allow for a huge variety of their driver’s physical disabilities. They’ve helped out countless drivers, including Billy Monger, providing him the car for his first race back after his accident.

With the team expanding at a rapid rate, it culminated in them entering the BritCar Endurance Championship in 2020. Therefore, it only made sense around that time to expand into sim racing.

During lockdown, simracing really came to the forefront. eTeam BRIT organised their own events and championships across multiple titles. These events were open to anyone who wanted to get involved. This broadened their reach exponentially, encouraging more and more people with disabilities to get involved.

This subsequently led to the team helping any physically disabled hopeful sim racer who wanted to race. eTeam BRIT fitted their drivers with the appropriate hand controls that aided their real life drivers. Fostering a strong, inclusive community and welcoming people in is what the team is all about. But they are also about getting results.

They compete across various championships but perhaps the highest profile series you can find them in is the VCO Esports Racing League. This series utilises three simulation platforms: iRacing, rFactor 2 and Assetto Corsa Competizione. Having competed in the Spring Cup, they’ll be back for the Summer Cup in June. They will no doubt be hoping to emulate the success of their track racing sister team.

In 2022, their season could not have started better. For the first time, Team BRIT entered into one of the premier championships in the UK; British GT. In partnership with McLaren Customer Racing, they acquired a 570S GT4 car to race in the series. In their first round at Oulton Park, they really delivered on their promise.

Their line-up is made up of Bobby Trundley and Aaron Morgan. Trundley has autism and was non-verbal until age 11, and Morgan lost the use of his legs in an accident age 15. Together they got two podium finishes and finished ahead of more experienced Silver class competitors.

But now they want to go a step further. On 28 March, the team announced their Disabled Sim Racer to Disabled Track Racer program. It will see any sim driver physically or neurologically disabled earn a chance to race for real.

The program will start off slowly, with their first driver being Yvonne Houffelaar. The Dutch driver was forging a racing career of her own but it was cut short due to a diagnosis of scoliosis. She then found solace in sim racing, and was hired to be eTeam BRIT’s team manager. Houffelaar subsequently was also selected to be eTeam BRIT’s first driver to go from the sim to the track.

Houffelaar has already undergone testing and the intention is to enter her into the British Endurance Championship (formerly BritCar) finale. But it won’t stop there as the plan is to eventually open up the program to as many people as possible. However, as Team BRIT founder Dave Player told us, it won’t be just anyone as to be a track racer takes more than just speed.

Player told OverTake that the people that will get selected to compete in the real world are those who prove to be worthy of investment. So, whilst being a quick and capable is always a plus point, it’s crucial that a driver must make the effort to attend sponsorship events, and for them to be able to be a great ambassador and representative. So, not just anyone can earn the ultimate prize of becoming a track racer for Team BRIT. But if they do, there are immense plans in the works.

What does the future hold?

Since its inception, Team BRIT’s aim is to be the first all-disabled team to compete at the 24 hours of Le Mans and they’re aiming to do this for 2024. Their trajectory from running in amateur events to big name 24 hour races, to then being in British GT certainly suggests that they have what it takes to be successful. At that point, maybe that lucky sim racer whoever it will be will end up competing at Le Mans.

As for eTeam BRIT, the equivalent goal also applies as the 24 hours of Le Mans Virtual is on their radar. Ultimately, eTeam BRIT will still remain open to anyone and whilst it is a competitive esports racing outfit, they also pride themselves on building a community to allow anyone a chance to scratch a racing itch.

This is true for Team BRIT as well with their track days. Check out this video by Jimmy Broadbent when he attended one of these track days. Open to all, they will help anybody facing physical or psychological hardship. The goal will always be to demonstrate what they can achieve in racing.

During a sim racing event, one of eTeam BRIT’s drivers overcame their extreme social anxiety to attend. Prior to this event, they had not left their home for more than an hour per day in over ten years. Also, Bobby Trundley spoke openly about his sensory overloads and social anxiety in an interview with Sky Sports.

But that is truly the power of this team.

These are a group of people who show that you can overcome challenges and find solace in an activity we all love. Whether it’s on track or in a simulator, one thing unites us all. All members are an example to all of us of what we can do with our determination and our love for racing.

Are there any personalities in esports racing you would like to nominate for the next edition of Hero of the Month? Tell us on Twitter at @OverTake_gg or in the comments down below!