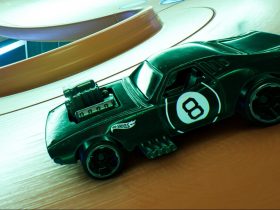 Christmas is about getting together with the family, (hopefully) calming down a bit and celebrating love and giving. For a true racing fan, this doesn’t mean you have to stay off the grid, though.

To combine the thrill of racing with the Christmas spirit, its essential to have the perfect soundtrack. Here are some suggestions to push yourself to victory while maintaining your christmas vibe or to simply find a new gem for your raceday playlist.

All I Want For Christmas Is You – Point North

The original version of this one, by Mariah Carey herself of course, is already one of the zippiest christmas songs out there. However, this punkrock rendition is definitely better suited for making your blood boil while striving for P1. Remember: The only one who can make your on-track wishes come true is yourself.

If you’re a Christmas hater, then you shouldn’t have to read this article for too long before you find something for you as well. This anti-christmas hymn by the rockband with the famous drummer Travis Barker has you covered. Lightning fast drums and shredding riffs will fuel your anger on the asphalt and convert it into lap time.

Leo Moracchioli, the man behind the Youtube channel “Frog Leap Studios” has specialized in creating catchy and entertaining metal covers of pop songs. While most of us might be tired of the WHAM! version of this modern christmas evergreen, his iteration of Last Christmas can build hype for all kinds of racers, even ones who don’t care for metal. The aggressive sound is a perfect fit for destruction derby games like Flatout or Wreckfest. Plus: If you ever wanted to know how to become a DJ with only a zipper – watch the YouTube clip.

This sarcastic garage rock Christmas song fits perfectly for fans of open world racing games like Forza Horizon 5. A moderate tempo and a groovy chorus evoke that pure radio–on–the–road feeling. This song manages a fine balance between inspiring you to go faster, while also helping you to relax, all at the same time.

For those who want to feel the Christmas mood while tuning their rides and optimising setups, there are many LoFi–editions of christmas carols out there. The relaxing and calm vibe they create are perfect for when you want to take your time to find the right setup for your needs. Is there anything better than to sit down for Christmas dinner knowing that you might be hitting new lap records soon?

As long as the Mario Kart series has existed, there have been snowy, icy tracks. The most popular one is probably the GameCube edition of Sherbet Land. While the mood on track often vascillates between happiness and aggression, the music spreads nothing but joy. It’s one of the few tracks where you probably won’t throw your controller against the wall after falling down from P1 to P8 because you got hit by a blue shell.

On the contrary, the Mario Kart Tour track Merry Mountain overflows with orchestral epicness. Trombones and violins push you trough the course while creating this very “Christmas movie” type mood. There’s nothing wrong with combining these soundtracks with other racing games or sims as well. Perhaps when using the winter mods in Assetto Corsa?

We are now leaving the area of Christmas carols and overtly Christmas-related songs. But don’t fret, because there are still plenty more songs which we think you can use to enhance your holiday feel as well.

This is a powerful grunge song about cherishing where you are and what you have, not a bad thing to be reminded about at the end of each year. Above all, the riff kicks butt and will not release you even after you have crossed the finish line.

The ultimate song to wake up to. You can literally feel the sunrays tickling your nose when listening to this RnB tune. Start with a relaxed open world tour before getting on the grid. If it’s snowy outside, the atmosphere will be perfect.

Some people might connect christmas to rather negative feelings like stress, anger or annoying relatives. If your holidays are just like that and you are racing to get rid of your frustration, this fast paced hardrock track will help you. It totally harmonises with the roaring sound of an engine being pushed to the maximum. If everything becomes to much, have your personal meltdown YOUR way.

The name of the artist gives a hint: This song is for the intense period BEFORE the lights go green. There’s never been a better reason, or to be honest any reason at all, to let the pre–race footage roll. But as soon as the first chorus starts, make sure to start the race. Working your way to the front of the field during lap one will never have felt better, we promise. The same goes for Scott & Brendo – Knock the Dominoes, but this RnB hymn works better in surroundings full of neon lights like in recent Need for Speed games.

HipHop mixed with aggressive electro beats results in another perfect mix for underground racing action. Whether it’s sprint, drag, drift or circuit racing that you’re going for, this tune will have you covered from the main menu to the finish line. Can’t get enough from this kind of vibe? Give Pegboard Nerds – BADBOI a try. This track adds a little more spice to the mix and it brings the tempo with its quick drum rhythm.

Star Wars Episode One: The Phantom Menace is a difficult topic, no question about it. But the soundtrack by John Williams was great. Especially during the final duel between Darth Maul and the jedis. This epic electro remix of Duel of the Fates will give your races an intense and sublime atmosphere you probably haven’t experienced before. The acctentual chants even maintain a little christmas feeling, if you want it. This also works pretty well for futuristic racing games.

This one is another driving electro beat with a touch of trance that works great with futuristic racers. In particular, games with weapons & power-ups will benefit from it. Explosions or weapon sounds add an oddly satisfying touch to this tune.

The Prodigy – Invaders Must Die

An all time classic which works with all kind of racers. Dirty racers like rally simulations or e.g. the Motorstorm series are made for especially this kind of track, but it also guaranteed to get you pumped on any sim. You might need to make sure you can stay focused enough to prevent yourself from shaking your head to the beat during the race.

This is the song you want to hear on your next highlight reel. A steady, but hammering beat combined with a groovy guitar rhythm and electronic distortion sounds. Perfect to play on your best of montage, or you can simply let the replay of your last race roll and enjoy the fruits of your hard work. A christmas gift to yourself, one might say.

What is your preferred racing soundtrack? Tell us by tweeting @OverTake_gg or leave a comment down below!