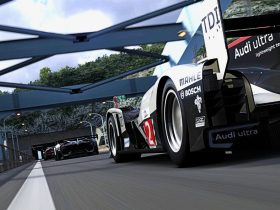 Here are three underrated simracing content creators we reckon you should check out.

We all know the usual crop of racing game content creators, like Jimmy Broadbent, Tiametmarduk, Super GT, and so on. But when it comes to entertainment, there can never be enough!

So we found three racing game content creators who have at least less than 100,000 subscribers on YouTube and we believe you should go give them a watch.

You may be familiar with Hun under a variety of slightly different aliases. She has at different times prefaced the name ‘Hun’ with different terms, including Formula and Motorsport. Now she goes by ‘JustHun’. While her identity is constantly changing, what stays the same is her infectious enthusiasm and love of driving games and playing with her community.

Garnering popularity initially from TikTok, she took to Twitch and has 4,400 followers and nearly 1,700 subscribers on YouTube. She streams the likes of the F1 game, Gran Turismo 7 and even race watch-alongs.

Hun – or Naomi – is a relatable and lovable individual whose numbers don’t reflect her brilliance. If you subscribe to Hun, you will not regret it, so do check out Hun’s Twitch and YouTube channels.

Next up is a diehard racing fan who has only recently joined Veloce Esports. DurkChocolate has just short of 19,000 Twitch followers and nearly 4,000 YouTube subscribers, and his content is centred on F1 discussion and playing the F1 game. He isn’t afraid to branch out though, having committed to a couple of iRacing Special Events.

Durk has also been featured in the Celebrity Raceoff by Codemasters, and in many Veloce Esports videos. His exuberance is unmatched and watching him on stream, it just feels like you’re with your close friend and having a laugh so give his Twitch and YouTube channels a visit!

Fans of the classic Top Gear trio who miss their episodes, good news! No, nothing to do with the Dacia Sandero. Tom Matthews makes amazing long-haul content on many driving games, and he has just over 75,000 subscribers on his YouTube channel Vintage Matthews.

The influence of Clarkson, Hammond and May is clear to see. Matthews’ channel is packed with challenge videos reminiscent of what Top Gear did, like the classic race between a car and another mode of transport, and the usual batch of cheap car challenges.

The production value that goes into Matthews’ videos, even the simpler and less stylised content is very well made and immensely enjoyable. Check out Matthews’ channel on YouTube and binge watch all of his Top Gear-themed videos from over the years.

Will you be checking out any of these creators? Tell us on Twitter at @OverTake_gg or in the comments down below!