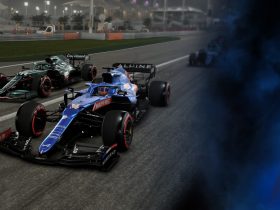 “Grinding is the Biggest Issue there is”: Esports Racing Psychology with Expert Jolina Bering

MotoGP esports champion AndrewZH explains how to prepare to get the fastest lap time in Ride 4.

Learn from the best! From MotoGP esports world champion Andrea ‘AndrewZh’ Saveri for example. Holding the record for the world’s fastest lap time on the circuit of Mugello, he now shares his valuable knowledge on how to prepare to be the fastest on the track. Watch his tutorial and combat your frustration about ever-unchanging, average lap times in Ride 4.

All settings on: speed

The first crucial decision to be made to become the fastest driver on the track is of course: which bike? While this is largely determined by individual preference, Andrea recommends the Ducati Panigale V4 for the Mugello circuit. The bike is easily one of the fastest in the game while also still enabling the racer to take the perfect line around the curves.

After choosing a bike, Ride 4 offers a bunch of other factors to adjust, which can greatly help improve the lap time. Among them are the tires. Unfortunately, these cannot always be adjusted for the entirety of a race, as weather conditions might change and force drivers to change, but Andrea can still provide some tips on how to handle situational tire-decisions.

Besides that, gear settings as well as brakes and fuel management can have a big impact on lap times. Andrea recommends going aggressive on the latter two for Mugello. He also adds that there is no universal solution to the bike’s setting for all tracks in the game. As a rule of thumb, drivers should experiment with different settings on the tracks to find out what works best for them.

What works for you when it comes to improving lap times? Tell us on Twitter at @OverTake_gg or in the comments down below!